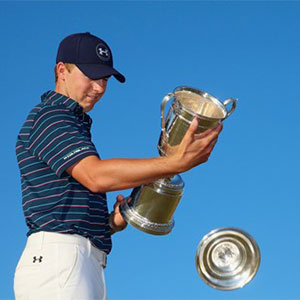 Jordan Spieth is halfway to a calendar Grand Slam of Major titles after coming out on top in a thrilling climax to the 2015 US Open at Chambers Bay.

Playing in the second to last group, Spieth made a birdie at 18 to reach -5 but Dustin Johnson, who had birdied 17, had a 12-foot eagle putt to win his first major - then three-putted.

Johnson had to settle for second place alongside Louis Oosthuizen who had begun the tournament with a 77 before shooting 66, 66, 67 including just 29 on his final round back nine.

But Spieth, who had made a double-bogey on 17, becomes the first player since Tiger Woods in 2002 to win the first two majors of the year.

"So for that turnaround right there, to watch that happen, I feel for Dustin, but I haven't been able to put anything in perspective yet.

"I think it will sink in a little quicker than the Masters did given that it's already happened but, boy, what a team effort.

"Yeah, I mean, every single thing that I'm able to do, somebody seems to find a history lesson on why I was the youngest to do something or as young as somebody way back when," Spieth added.

"For me, this is my life. I've now been doing it for a while. I don't really think of my age. I just think of us all as peers.

"It's cool to be able to have two legs of the Grand Slam now, and to conquer golf's hardest test.

"The U.S. Open is conquering the hardest layout in all of golf. That's the way every year. The fact that we did it is amazing. We really grinded this week.

"Didn't have my best stuff ball striking at all and we really grinded over those 4- or 5-footers, and that was the difference."

Johnson was graceful in defeat despite the disappointment.

"At the end of the day, golf is golf. I've got my family and that is the most important thing to me.

"My trophy at the end of the day is holding my little man. I couldn't be more proud of myself or my family."