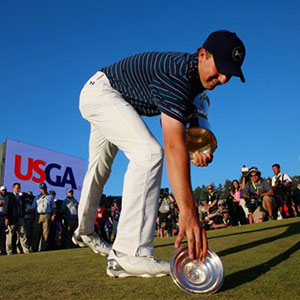 Jordan Spieth got over his issues with the "dumbest hole" he'd ever played in his life, to march on to victory at Chambers Bay and earn himself back-to-back Major victories at the US Open.

The 21-year old followed up his destruction of Augusta's spectacular playing surfaces with victory in polar opposite conditions at Chambers Bay.

The Washington course came under heavy fire from players and fans with Henrik Stenson likening the putting surfaces to 'broccoli'.

Not being fazed by the conditions, Spieth now has become the youngest player since Tiger Woods to win back-to-back Majors this early into a season.

At just 21, Spieth has also become:

"Yeah, I mean, every single thing that I'm able to do, somebody seems to find a history lesson on why I was the youngest to do something or as young as somebody way back when," Spieth added.

"For me, this is my life. I've now been doing it for a while. I don't really think of my age. I just think of us all as peers.

"It's cool to be able to have two legs of the Grand Slam now, and to conquer golf's hardest test.

"The U.S. Open is conquering the hardest layout in all of golf. That's the way every year. The fact that we did it is amazing. We really grinded this week.

So let's take a look into this record setting superstar's Major winning bag.