Jordan Spieth: The Making of a Major Champion 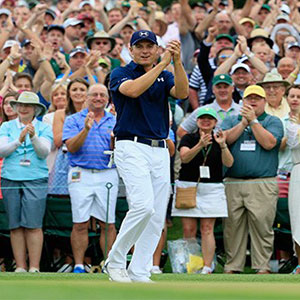 At the close of the last Major, in the darkness of Valhalla, all the talk was of how many of the big four Rory McIlroy would chalk off and how quickly he could catch Tiger. We could comfortably afford him one a year, possibly two depending on the venues.

Now we have Jordan Spieth, still 21 until late July, and a player some of us discounted on the basis that he had been in the mix too often in recent weeks – his last three finishes on the PGA Tour have been 1-2-2. Wrong.

Or that he was runner-up here 12 months ago, on his debut, and that he wouldn’t possibly be able to repeat that type of magic.

As we're repeatedly reminded it takes a number of visits to learn the nuances, gusts and breaks of Augusta National. You don’t just bowl up on your second trip down Magnolia Lane and win, do you? Well, you do actually if you possess the stunning skills of Spieth.

The young Texan plays an uncomplicated type of game which tends to culminate in him rolling in another putt.

He doesn’t hit it the longest, or the straightest off the tee, but he gets the job done the closer he gets to the hole. And, should there be the odd blip, he bats it away mentally in no time.

He’s confident without being cocky and, on the face of it and according to his peers, he’s one of the good guys.

He won’t get carried away with his heroics here, or anywhere else, something he puts down to his sister, Ellie, who has autism. He has already set up a charitable trust which focuses on special needs.

“She's the funniest member of our family. It's humbling to see her and her friends and the struggles they go through each day that we take for granted –their kind of lack of patience or understanding, where it seems easy for us and it's not for them.

“But at the same time, they are the happiest people in the world.”

This is Spieth’s third win on the PGA Tour but it is the one Down Under at the back end of last year that he credits as the turning point from going from brilliant Tour player to world beater.

On the final day he shot a 63 to win by six against a field that included Rory McIlroy and Adam Scott.

“I think the Australian Open may have been the most important tournament that I've ever played in because at the time, it had been maybe a year and a half since winning the John Deere in that play-off where I kind of squeaked in, luckily.

"And going there to an elite field with the world No. 1 player and obviously with the local favorites Adam Scott and Jason Day.

And I put myself in a position and just had a level of patience that I had not had when I was in contention prior to that.

I was trying to want it too bad, trying to get off to too fast of a start and not realising the length of a round and how a final round in contention can almost feel like two rounds and you have to maintain the same patience the whole way.”

He has now certainly learnt how to pace himself.

Last year Spieth led the Masters with 12 holes to play and the clinical, simple approach that got him into that position was one that he hoped to adopt again on the eve of the tournament.

Another part of me says, you know, let's not overthink this place, keep it simple and make it like a regular event because that's how I've had success in the last few tournaments, just trying to hit as many greens as possible, get into a rhythm with the putter. Once that happens, you know, you see a couple go in and the hole gets bigger.”

He led after day one and a 64 that could have been the first 62 in a Major, come Friday and Saturday nights he possessed the lowest aggregates in Masters history. As the week went on one after another record would go by the wayside.

And, now, he has a Green Jacket to go with them and a new world ranking just one behind McIlroy.