Justin Rose loses out to David Lingmerth in Memorial play-off 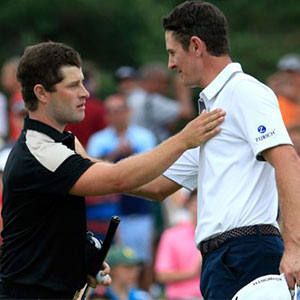 David Lingmerth recorded a maiden PGA Tour victory at the 40th Memorial tournament after a play-off was needed to separate the Swede and Justin Rose.

Both Rose and Lingmerth were inseparable at 15-under after 72 holes at Muirfield Village, with the 27-year old Lingmerth missing an opportunity for outright victory after missing his birdie putt on the final hole.

A par at the final hole for Rose meant a return to the 18th hole to decide a winner.

Rose produced a putting masterclass, sinking from 15 feet to par, with Lingmerth matching the Englishman stride for stride to take the playoff to a second attempt at the 18th.

Inseparable at the 18th again, the play-off was taken to a third playoff hole where Rose was unable to match the ice cool Swede after a poor approach cost him the tournament.

"It was a fight in the play-off.

"Justin made a great putt on the first playoff hole, and I had it to make one on top of him to extend it. And then I hit a bad second shot and had to scramble for my par on the second one.

"So I was able to do that and I feel pretty good about that.

"This is my third year on the PGA Tour, and it's one thing to be a PGA Tour player, and it's a whole another thing, I think, to be a winner out here.

"Just to be on that list of PGA Tour winners is a special feeling and something that no one can take away from me, so I'm pretty happy about that.

"And this tournament, with Mr Nicklaus as host, is yeah, I can't think of many other tournaments that would be put above this one. So I'm pretty thrilled."

This win improves upon Lingmerth's previous best PGA Tour finish at the 2013 Players Championship where he finished runner-up to Tiger Woods.

"I knew I handled myself pretty good back then at The Players there. I didn't end up winning, but I did all right," said the Swede.

Rose was impressed with his less well-known playoff opponent: "I don't know him really at all, to be honest with you. Just say "hey" in passing, that's about it," said the former US Open winner.

"He seems cool, calm and collected. He did a good job. He kept it together well. And like I said, he finished off some nice putts."

The Englishman was visibly disappointed after some incredible golf dragged him into contention during the latter stages of the tournament: "I just poured my heart out, really.

"I just didn't play well. It was definitely a tricky day. Just missed some iron shots, I suppose, starting on No. 3. Just those critical little moments where you leave yourself with tough shots where you can't get up and down.

"That's what this course is all about. That's what I wasn't doing the first three day days and I think with the added breeze, it made those mistakes easier to happen.

"I just had one too many bogeys today. I was proud of the way I fought back, and the whole day was just clawing back into contention. It would have been lovely to have won.”