A one-foot putt at the Kraft Nabisco Championship, now the ANA Inspiration, was all that separated In-Kyung Kim from her first major victory.

She missed and went on to lose the subsequent play-off. The wait would go on.

Fast forward five years and the now 29-year-old has finally banished those demons, seeing out a two-stroke victory at Kingsbarns to lift the Women’s British Open title.

Kim had held a six-shot lead heading into Sunday’s final round, got off to the perfect start with a birdie at the opening hole. She added another at the 8th before a first bogey in 45 holes on the 9th. It was also her last. 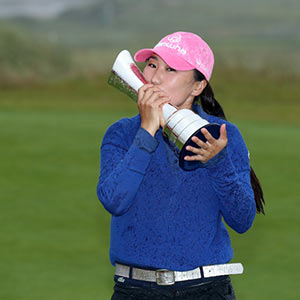 It was going to take something special to match the unflappable Korean.

First to take a swipe at Kim’s lead was Thursday’s first-round leader Michelle Wie. But the American’s 6-under-par 66 still left her five back in the clubhouse.

Next, it was the turn of Jodi Ewart Shadoff. The Englishwoman, who confirmed her Solheim Cup spot in the process, produced a bogey-free 64 to match the course record set by Wie on Thursday. The impressive display of birdie-making saw her cut the lead to just two.

While Shadoff returned to the range in case the demons of 2012 came back to haunt Kim, it proved unnecessary with Kim parring her way through the back nine to sign for a 1-under 71 and final total of 18-under.

“I never expected to win this week. I get asked all the time about my putt in 2012 and the way I look at it is that it isn’t the worst thing that can happen in life.”