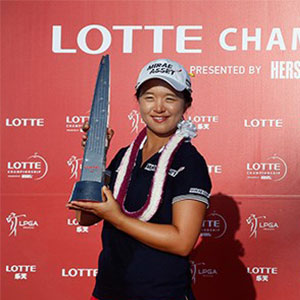 World Number Two Inbee Park had to settle for second as Sei Young Kim holed out for eagle from 154 yards to win the Lotte Championship in Hawaii.

Kim, the overnight leader, looked to have blown her chance of victory after finding water with her tee shot at the 18th, with her South Korean compatriot Park setting up a birdie putt to claim the title.

But Park missed her short putt, allowing Kim to produce a moment of brilliance and chip in from the side of the green to force a playoff with both players level at 11-under.

After winning the Founder Cup earlier in the season, the rookie produced the shot of the tournament - holing out for eagle on the first play-off hole.

Park was unable to match her compatriot and had to settle for a runner-up place.

“Obviously able to chip in and hole out from there, she’s a good player,” Park said.

“She’s already won twice this year and she has definitely proven herself that she can compete out here.

Speaking through her translator, Kim said: “I don’t know what happened today.

“I don’t know what I’ve done again to deserve this, but I feel like every time I win a tournament I have to do something crazy or overcome some type of obstacles. I don’t know why it keeps happening, but it feels good.

“I thought maybe something crazy will happen again, so I tried to get myself under control and calm myself, and look what happened.“

"I had so much fun this week," Wie said. "My game is really starting to feel good. It was just fun this week.

“So I am going to just get that momentum going for the next couple of weeks and the rest of the season."