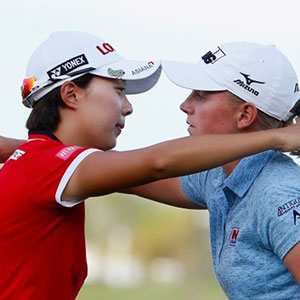 The 19-year-old was forced to hit from under a tree with a beehive above her head on the 10th and despite asking for relief she had to play.

Kim played out on to the fairway and went on to make bogey but then birdied five of her next eight holes to beat Lewis by three shots.

"I was just scared of the bees and I didn't want to be stung," Kim said.

"So, I kept asking if I can get relief and I kept asking and they said, 'No, you can't.' So, I just swallowed my fears and tried to play the shot as best I could."

Kim finished with a 5-under 67 to seal her her second LPGA Tour title.

"I think the situation on hole 10 helped," Kim said.

"After I went through there and I got a bogey, I just realised there's no time to feel pressure or feel afraid. I just had to go out there and play."

Lewis, who won the event in 2013 and finished with a final round 68, paid tribute to Kim’s battling qualities.

"She's just really solid," Lewis said. "Kind of had to battle back from some adversity there on 10.

“Even when I did make some putts, she made the putts to follow and she put a lot of pressure on."

Kim has now risen from eight the fourth in the world ranking and is the fifth South Korean winner in the first six events this year.