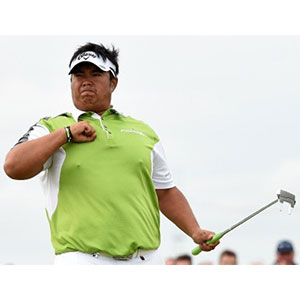 The 26-year-old Thai star became the first winner of the event after holding his nerve against Robert Karlsson in the final.

Three down with four to play the Swede knocked in two birdies and a par and then fired his approach to the 18th to 10 feet.

But Aphibarnrat, who beat home hope Marc Warren in the last four, hit his to just four feet and rolled it in.

England's David Howell recovered from his narrow semi-final defeat to Karlsson to beat Warren by one hole in the third/fourth place match.

“This is a very important win for me because it is the first time I have won outside Asia,” Aphibarnrat said.

"I have always said that we are just a little small country in Asia and that my next step to win in Europe, so I am so happy and so proud of myself that I was able to prove we also can win out of Asia.

"It’s an important win for Thai and all Asian players. I didn’t have too high expectations this week but I just came here and tried to enjoy the whole experience of playing in Scotland.”