Brooks Koepka became the seventh straight first-time major champion after a brilliant final-round display to win the US Open by four shots.

The US Open has a new champion: Brooks Koepka. 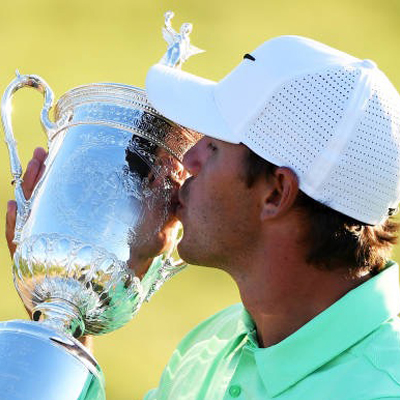 Anyone see 16 under coming? For all the pre-tournament talk of waist-high fescues and extreme yardages we ended up with Brooks Koepka tying the lowest 72-hole score to par in US Open history – matching Rory McIlroy’s efforts in 2011 – 67-70-68-67, not a problem.

For part of the day it looked like being a possible shoot-out between Koepka and Brian Harman, then Hideki Matsuyama asked the question with a back nine of 32 to set the clubhouse target at 12 under.

But then Koepka, who was the most solid on the front nine with an outward half of 33, turned it on in some style over the closing holes. Incredibly he hadn’t dropped a shot on the back nine all week and he began it with a bogey but he then ran away with it. Birdies at 14, 15 and the short 16th (he had also made an impressive par save at the 12th) sent him four clear as a seventh straight first-time major champion went into the books.

Previously he had only won once on both the PGA and European Tours having begun his career on the Challenge Tour – all of which will seem like a lifetime away for the 27-year-old Floridian.

As for the major minor places Harman bogeyed the last to slip back into a share of second with Matsuyama, Tommy Fleetwood shooting a 72 for fourth place on his own.

Feel-good moment of the day

There’s not too much reason to feel sorry for Justin Thomas but going into the biggest round of your life having the previous day shot the lowest round (to par) in US Open history isn’t the perfect preparation. I know, that sounds odd but Thomas was the one answering all the questions on Saturday night while his nearest challengers could all get on with their business.

Thomas, who was wished all the best by his good mate Jordan Spieth on the practice ground, had nine birdies and an eagle on Saturday. A day later he managed just the one in a 75, 12 shots worse than his previous round.

Feel-good moment of the day

You don’t as easily associate Arnold Palmer as much with the US Open as you might the Masters or our Open but he did win one, closing with a 65 to beat the then amateur Jack Nicklaus by two shots at Cherry Hills in 1960. Palmer went into the final round seven shots adrift of Mike Souchak.

So, with this being the first US Open since Palmer died last year, the USGA had a special flag made up for the 18th hole which featured the great man’s silhouette and trademark throwing of his visor.

There was a replica of Palmer’s pin for the fans, media and players as well as the same silhouette on the netting on the grandstand surrounding the 18th.

Best shot of the day

Before Koepka ran away with things it appeared that Matsuyama might have forced a play-off with his storming finish. The Japanese sensation was put on the clock over the back nine but he still managed five birdies, the last of which came at the 72nd hole courtesy of this neat, and gutsy, chip. As it transpired he was well short, at the time it was some effort.

Worst shot of the day

“He laid sod over that,” was the fairly brutal assessment of Charley Hoffman’s very mediocre pitch to the 8th hole. With just 60 or so yards remaining he somehow hit it half that distance en route to making a treble bogey, to go from three back and being one of the few players going forward to slamming it into reverse and out of the championship.

Hoffman still signed for a 71 despite the seven.

Stats of the day