Lee Westwood hasn’t given up hope of a Green Jacket 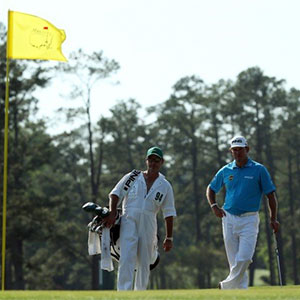 Lee Westwood has been winning on tour since 1996, has finished inside the top three in all the Majors, been the No. 1 player in the world and has been on the last nine Ryder Cup teams, helping Europe to win seven of them.

Over the last five years his worst effort in The Masters has been a tie for 11th, a level of consistency no other player can boast.

Westwood explains how it’s the constants in his swing that have kept him competitive throughout his career and why, at 41 and with the odd fleck of grey hair, he could still be a threat at Augusta.


How comfortable are you now at Augusta?

I have found the knack of playing it. Even if I’m not playing well, I can get my way round there.

It does fit my eye, I like dealing with the greens and using my imagination and the shots off the tee suit me. There is a big premium in being able to hit it 300 yards in the air and you have a big advantage at holes like 1, 17 and 18.


What was 1999 like – you were out in 31 to take the lead and then dropped four shots in three holes?

That was the first time I had been in contention in a Major. I was tied for the lead playing with Tiger who hadn’t had a good front nine and I had. I bogeyed 10 and doubled 11 and, before too long, I was out of it. I panicked a little bit being in that situation.


Is the view from the top of the hill at 11 the best on the course?

When you play down 11 and get on that hill and see the green and the crowds banked up on the hill it is always a special moment.

It is all so well manicured, there is nothing out of place and it is a great week for any golfer to be there. It is such an eye-opener to see how green the course is, how white the clubhouse is, the undulations.

I still get the same tingle every single year getting dropped off down Magnolia Lane.

They rarely change the course and it is always very subtle, all of a sudden there will be a new flag and you think how did they get that there and they will have changed the slope slightly.


What is the hardest hole?

The 4th probably. If you play that in level you would be delighted.

Sometimes you miss it in spots and think it isn’t too bad and you have always thought that wouldn’t be a bad place to get it up and down from, then you are out by two yards and you are completely knackered.


Whose brains have you picked over the years in working out how to play the course?

I’ve never really had that much advice there and have always made my own plan.

Obviously you stay under the flag even if that means being off the green and it is the kind of course that changes every day depending where the pins are. If the pin is left on the 2nd you can’t go left and that’s a par 5. So you are stood on the tee, two shots away from putting and thinking where to hit it. You don’t become No 1 in the world by not being a good putter and having a short game.


What about the number of uneven lies?

I think it may be something to do with the fairways being a little bit longer than normal. Certainly you get a lot of sidehill lies.

Obviously 13 is one of the trickier ones because you’re on a sidehill lie, but sometimes you’re on a downhill lie, as well, which would lend itself to a draw and the creek is on the right.

So you’re aiming at the creek trying to draw it in to a green that probably would support a fade rather than any other shot. So there’s a lot of contradictions stood over the ball in that fairway.


Martin Kaymer tried changing his game to hitting a draw to have a chance of winning at Augusta, is that the case?

I don’t necessarily think Martin is right about that, I listened to him when he won the US Open and he said that he still had to think about hitting a draw to win the Masters.

There are only two tee shots where you need to nowadays, at the 10th and 13th. They have pushed all the tees back so it is a lot further from the apex of the corners.

At 13 you can get away with a 3 wood to leave a flatter stance and avoid those awkward lies.


What did you make of Bubba hitting it over the corner there to leave himself a wedge?

I didn’t see Bubba’s tee shot but I have seen others do that.

Hank Kuehne hit 3 wood over that corner, obviously it is longer now but I have seen Alvaro Quiros, Angel Cabrera and JB Holmes hit over the corner and, after the storm, there are a few more gaps now.


Your putting and short game is always held up as the reason for your lack of a victory at Augusta, is that fair?

You don’t become No 1 in the world by not being a good putter and having a short game.


If you had to put money on one player to break 70 who would it be?

I would have my money on Tiger when he’s playing his best, it is all about dominating the par 5s and he has the length and ball flight.

As does Phil but I’d go with Tiger, Phil would take the biggest crowd.


Should you win this year, what would be your Champions Dinner?

I never answer that, I’ll tell you when I win it.