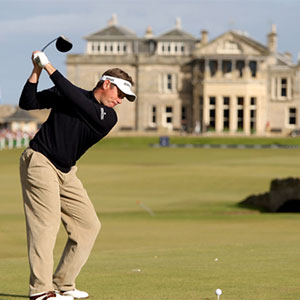 The opening tee shot on the Old Course at St Andrews is not one of the most difficult on The Open rota but it can still be a daunting prospect.

Despite the widest of fairways, there is the possibility of going out of bounds. But it takes something out of the ordinary to make that dreaded possibility a reality.

“The first time I played there in a tournament was The Open Championshipin 1995.

“I was playing with Gene Sauers and Katsuyoshi Tomori. I can remember being stood on the putting green and the group in front of me was Peter Baker, Ian Baker-Finch and Arnold Palmer.

“Ian Baker-Finch had won The Open Championship in 1990. He stands on the 1st tee, takes his club back and as he comes down his hat starts to blow off and hits about three inches behind the ball, rolls his hands over it and hits it out of bounds left.

“I’m stood there as a 22-year-old playing in my first Open thinking ‘oh my god’. If a former Open Champion has just knocked it out of bounds, what chance have I got?

“It didn’t relax me, it just brought it to the forefront of my mind that it is actually possible to hit it out of bounds.

“Thankfully I managed to steer a two iron somewhere down there and I think I made a par.”

So often the nearly man in Open Championships, Westwood insists the 2015 venue is right up there - not only for the challenge of the course but for the town of St Andrews itself.

“What’s great about The Open at St Andrews is the whole town gets into it and it’s a great atmosphere,” he said.

“It’s nice to go and have a walk around the town during the event.

“It’s nice to get away from thinking about the golf tournament - get out and have a bit of a chill out.

“It’s one of my favourite Open venues. It ranks in the top-3.

“The Open Championship is the best atmosphere of any tournament that we play.”