Stylish Leishman is king of the Hill

Australian Marc Leishman’s only other win on Tour came almost five years ago at the Travelers when he finished with a 62, now he has finally doubled that tally. And he did it in trademark Arnold Palmer style, ramming in a 51-foot eagle putt at the 16th before making brilliant up-and-downs at the final two holes.

The 33-year-old, best known for his play-off loss in the 2015 Open Championship, had a 69 on a day of high scoring in testing winds. Leishman will now get into the Masters and Presidents Cup team after a final day where any one of four players looked like winning over the closing holes.

In the end he pipped Charley Hoffman and Kevin Kisner by one, Hoffman birdied the 72nd hole, while Rory McIlroy looked right in it up until the last hole.

McIlroy, who was one over after 36 holes, had weekend rounds of 65 and 69. At 18 he split the fairway and, having seen Leishman’s score jump from nine to 11 under, went for his birdie and ended up three putting. He will be buoyed though by his tie for fourth with England’s Tyrrell Hatton and seven birdies on both Saturday and Sunday must leave him feeling positive about his game heading to the Match Play.

Hatton, the Dunhill Links champion and playing with Leishman, continued his brilliant form of the past few months and birdied the last to secure his playing rights on the PGA Tour.

Fellow Englishman Tommy Fleetwood, fresh from his runners-up finish at the WGC in Mexico a fortnight ago, had a remarkable week after opening with a 78 on Thursday.

The champion in Abu Dhabi then shot rounds of 66-70-68 to clamber into the top 10 and more valuable world ranking points.

Matt Fitzpatrick had six bogeys in a 76 to fritter away plenty of points and money while Justin Rose also failed to make any progress with a closing 73. 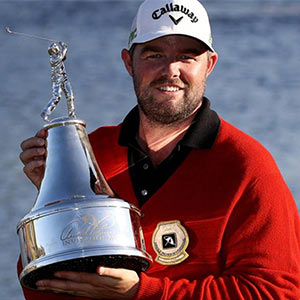 Last week’s winner Adam Hadwin very nearly holed in one at the 17th but his tee shot struck the pin full on and stayed out. The Canadian took sixth spot on his own.

“It’s amazing,” Leishman said. “It’s been quite a while and my son keeps reminding me – ‘Daddy why don’t you ever win the trophy?’ I’ve been trying extra hard for him and it was great today that he was here and a special day with everything honouring Mr Palmer.

“You always want to win to honour the greats and it’s a special year this year. It would have been great if he was up there standing on the back of the green but to win at his place is a dream come true.”