For Dustin Johnson and Anna Nordqvist it is a familiar story. 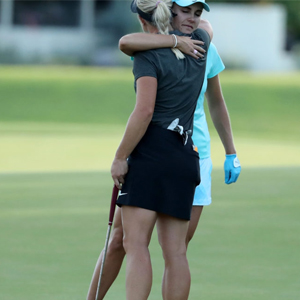 Now, Lexi Thompson is the latest player to fall foul to a breach of rules which saw the USGA enforce a four shot penalty nearly a whole day after the incident.

On Saturday Thompson marked her ball on the ninth green and nothing else was thought of it. Until, one eagle-eyed viewer emailed in to say 22-year-old had incorrectly replaced her ball.

After a video review nearly a whole day later she was penalised two shots for an incorrect ball placement and two more for signing an incorrect scorecard on the 12th tee during her final round.

We’ve rounded up how golfers, sportsmen and non golfers have reacted to the ruling and Lexi’s narrow play-off defeat…

Well it was an emotional day here for me, first off I do want to say what I had done was 100% not intentional at all I didn't realize I had done that. I want to say thank you to all the sponsors, volunteers and Mission Hills for making this week possible at the @anainspiration ! Also to the fans out there, words can't describe what you being there for me, meant to me. You helped me push thru those last holes so thank you for always believing in me. A big thanks to my caddy as well for always staying positive and being there for me when it got tough. I played some great golf so definitely a lot of positives to take from the week. Time for a very needed 3 weeks off now. Thank you everybody ❤

I had a fantastic week. Another close call. Hats off to @lexi the way she handled a brutal call on the course. CLASS ACT. What doesn't kill you makes you stronger. BELIEVE ME. Big congrats to my good friend @1soyeonryu on the win.


Viewers at home should not be officials wearing stripes. Let's go @Lexi, win this thing anyway.


So does that mean if a viewer calls in a ruling on the winner after the tournament is over, is the trophy taken away....? Wtf


So does that mean if a viewer calls in a ruling on the winner after the tournament is over, is the trophy taken away....? Wtf


Dissapointed to see it happen again. I know how you feel @Lexi - You played the best! #changetherules


👏👏👏@Lexi is SO CLASSY. Handled that with grace and fight. Career defining moment. https://t.co/CEzHlckCpE


Such a bummer. Gutted for @Lexi. Played her heart out and fought back so hard.. She deserved the W!


@Lexi , you showed tremendous heart out there. I applaud you for being such a class act 👏🏼👏🏼