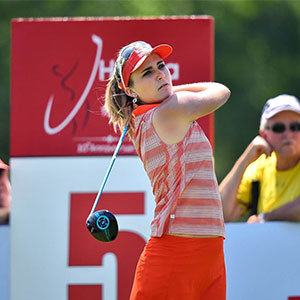 Lexi Thompson will move above Stacy Lewis into the World No 3 spot after a six-shot win in Asia.

The 21-year-old now has seven victories on the LPGA Tour and her 68 left her at 20 under for the four days.

She was pushed by last year’s US Open champion In Gee Chun, who started with three birdies, to get within one and the South Korean was only two back after a Thompson bogey at the 9th.

Then, at the par-5 10th, Thompson eagled and Chun, who birdied, couldn’t close the gap. She then double-bogeyed the 17th to just stay clear of a fast-finishing Jessica Korda (64) and defending champion Amy Yang.

Thompson is the first American winner of the tournament.

England’s Charley Hull finished in a tie for 30th place on one under.

What Lexi said: "I never like to count it as a win until it's over. I just try to play aggressive and play my best out there. I was just saying I had to make birdies to win this thing.

“She was playing unbelievable with a three-birdie start there, and I knew I had to make birdies to stop her. I was just trying to focus on my game and nobody else's out there."