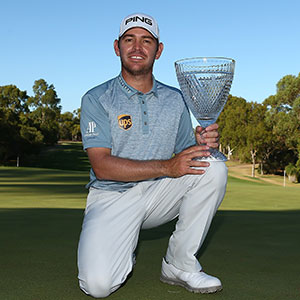 The former Open Champion had led by three overnight but that was down to one after a bogey at the 2nd while Jason Scrivener, who later shared the lead, and Peter Uihlein made some progress.

But back-to-back birdies at 7 and 8 put Oosthuzen three clear and a two at the 12th and the battle was then on for second.

Alexander Levy’s back nine of five under for a 66 squeezed him ahead of Scrivener and Gregory Bourdy also had a 66 for a share of fourth with Uihlein. A third Frenchman, Romain Wattel, took sixth spot.

Oosthuizen bogeyed the last for a 71, his worst round of the week, but it was enough to move him back above his mate Branden Grace into fourth place for South African wins on the European Tour, and makes it six wins in 11 events for the Rainbow Nation this season.

What Oosthuizen said: "I missed the greens on the second and third and was a little rattled after that but I settled in nicely and went back to just hitting greens and giving myself opportunities.

"I had a good stretch seven through to 12 and settled myself there and left myself with a vicious first putt on the last but luckily I had three. I'm flying tonight and playing Doral next week so hopefully I can take a lot out of this and play well."