Love conquers all at the Wyndham Championship 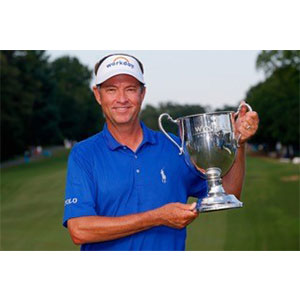 An 80th PGA Tour win for Tiger Woods never materialised but there was still a miraculous story as America’s Ryder Cup captain came through the field with a last-round 64.

Love was 186th in the FedEx standings and had missed the cut in eight of his last 12 starts but became the third oldest winner ever on Tour after a stellar front nine. It was his third success at this tournament.

The 51-year-old bogeyed the 1st and 7th but in between had four birdies and an eagle. He added another eagle at the 15th and parred in. Jason Gore needed a birdie at the last to tie Love but narrowly failed though he does keep his card. Paul Casey and Charl Schwartzel were part of a three-way tie for third along with Scott Brown, playing with Tiger, who had a hole-in-one at the 3rd.

Love said: "It kills me the last couple of years not to play in The Players.

“My friends at home assume I'm in because I won it twice. That one and the Masters are kind of crushing that you don't get in there.

“When I walked off 18th green I didn't know what was going on. I knew I needed to make birdies coming in.

“I knew that I had to make that par putt at 16 because you're just playing the game and you can smell the blood in the water. You know what's going on. But I didn't know the scores. I think that really helped me."