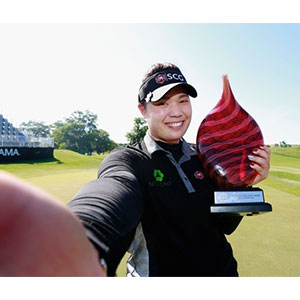 Ariya Jutanugarn became the first Thai player to win on the LPGA Tour with a victory at the Yokohama Tire Classic.

The 20-year-old from Bangkok finished at 14-under 274 to beat South Korea's Amy Yang and Americans Morgan Pressel and Stacy Lewis by one shot and finally reach the winner's circle after three top-10 finishes this year.

She started the fourth round with a three-stroke lead and managed to close out the win with a level par round of 72.

Yang shot 67, Pressel and Lewis both shot 68 as the trio finished tied for second at 13-under.

Needing a par for victory at the last Ariya drove into the rough then missed the green with her second but chipped to five feet and made the putt for her first win.

Earlier this season at the ANA Inspiration, the first major of the year, she led by two shots with three to play in the final round but bogeyed her final three holes to lose to Lydia Ko.

It was also a special win for another reason as her mum was in attendance on US Mother's Day. Thailand celebrate Mother's Day on August 12.

"Thank you for my mom for being with me all the time to support me and happy Mother's Day.”