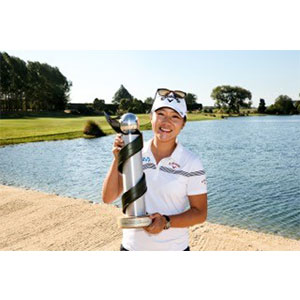 Ko led by one at the start of the day and, just before teeing off, a magnitude 5.8 earthquake struck just 10 kilometres from the course in Christchurch and lasted for 30 seconds. Over the next five hours there would be a total of 52 further aftershocks.

American Amelia Lewis, playing an hour ahead of Ko, was six under after 11 holes and one clear of the Evian champion but Lewis would finish with three bogeys.

Another Dane, Emily Kristine Pedersen, was also level with Ko after a birdie at the 10th but she would also drop shots late on. Ko made her move with birdies at 10 and 11, got up and down from sand at the next, and parred the tricky finish to win by two.

Afterwards the teenager shed a few tears and dedicated her win to her good friend and mentor former New Zealand Golf President Patsy Hankin who passed away suddenly last year.

She then revealed that she would be donating her entire tournament prize money to help New Zealand in some way.

What Ko said: “I have discussed this with my family and my team and this is something that we all want to do. We will seriously think about the best way that we can use this money to help New Zealand.”