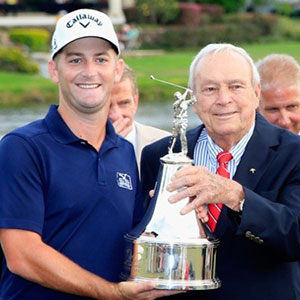 Matt Every claimed to 'have a feeling' that he would defend his Arnold Palmer Invitational title despite starting the final day three shots behind leader Henrik Stenson.

The 31-year old became only the third player to successfully defend in the tournaments history after carding a final round 66, finishing the tournament 19-under.

In a tournament that produced some fine golf, including Albatrosses from Zach Johnson and Daniel Berger, the consistency of Every was enough to seal his second Arnold Palmer Invitational crown.

"Last year I just made everything, but for me I was driving it really good this week and my irons were spot on. My accuracy was great," said Every, who now will make an appearance at Augusta for the Masters next month.

"But I kinda had a feeling. I was shaking some of those putts in late."

Speaking about his 18-foot tournament sealing putt, Every said: "On 18, it was straight down the hill. It's exactly what you want when you're under pressure.

"It was pretty nice. I had a lot of friends and family out here this week and their support was awesome."

Henrik Stenson had lead for a large portion of the final round, but dropped shots in vital holes.

The Swede's three-putt bogey on the 14th and three-putt par on the 16th allowed Every to overturn his one shot lead.

Stenson had an opportunity to force a playoff, but was unable to sink a 20-foot birdie putt at the last.

"Of course disappointed not to come out on top but all in all a good week,” the Stenson said.

"I saw Matt was making a move and all credit to him. He played a solid golf round and shot what, to win by one. All credit for a good score and I had it in my hand but didn't make it happen.”