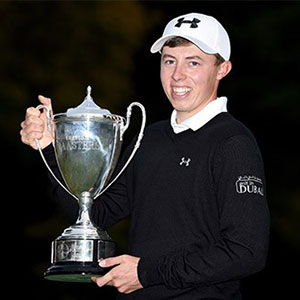 Matt Fitzpatrick, the youngest player in the field at just 21, claimed his first victory and £500,000 after closing with a 68 at Woburn to win by two from Shane Lowry, Soren Kjeldsen and Fabrizio Zanotti.

The Sheffield native said he had phoned his coach Mike Walker after his first three rounds, feeling that his game wasn’t quite there, but it was good enough to lift him to 59th in the world.

The key moments came when he holed from 20 feet at the 15th to lead for the first time and then from close range two holes later. He could then afford to drop one at the 18th. Kjeldsen will rue three-putting the 15th having found the green at the par 5 in two.

“Winning wire to wire is something most players dream of,” Fitzpatrick said.

"Jordan Spieth did so when he won the Masters and for me to be in the same category as him is pretty special. I have spent a little time with him (they share apparel sponsors) and I would love to get a text from him.

"This year my goal was to keep my card and I was not 100 per cent sure I was going to be able to do that after the start I had, but I managed to start to play well and the past two months have really got going and made a lot of money."