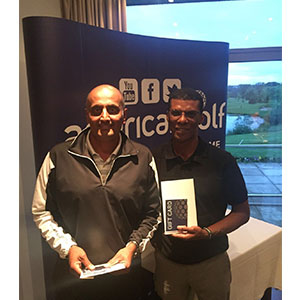 Local golfers Alpesy Patel and Russell Joseph, both members at Maylands Golf Club, have made it through to the National Grand Final of the American Golf 9 Hole Championship after a closely fought qualifying competition at The Shire London. The pair will now take their places at Ryder Cup venue The Belfry on 9th & 10th September to battle it out over the Brabazon Course for the title of the best 9 Hole golfers in the U.K.

The pair held onto victory by the narrowest of margins over Chigwell golfers Gavin Foster and Lee Williams, securing their place in the final by just one point. They will now line up at the iconic Midland Ryder Cup venue alongside the winners of 19 other qualifying competitions across the U.K. and Ireland.

“This is the second year for our 9 Hole Championship and it’s proving to be an incredibly popular format,” comments Daniel Gathercole Head of Marketing at American Golf. “It gives people the chance to play Championship golf after work, getting all the excitement of top level competition in half the time.”