McIlroy: How my dad helped get Guardiola to Manchester City

Just how much say did McIlroy’s dad, Gerry, have in Pep Guardiola becoming Manchester City manager?

Well, none. Obviously. But he sure would have had a go.

Manchester loyalties are split in the McIlroy family, with Rory an ardent United fan and Gerry a follower of City. 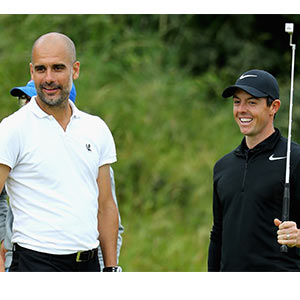 McIlroy Jr takes up the story: “My relationship with Guardiola started at the Ryder Cup in 2012,” he said after the pair played together in the Irish Open pro-am.

“He was there. That was his sabbatical year from management. He loves his golf. He went to the Masters that year, and to the Ryder Cup, [where] we struck up a bit of a relationship.

“Actually Guardiola and my dad walked all three days together and my dad is a huge City fan.

“At that time he was asking Guardiola, ‘When are you going to come manage City?’ He got his wish four years later. That’s how it started.”

It’s not. But it’s a good story for Gerry to tell the grandkids one day…