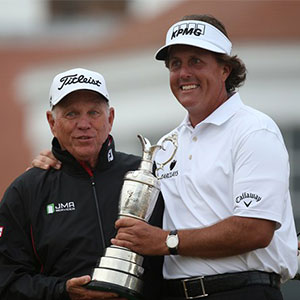 Mickelson reportedly flew to Vegas last week to break the news in person in a two-hour sit-down. The left-hander, who has won 12 PGA Tour and three European Tour events, including the 2010 Masters and 2013 Open Championship under Harmon’s watch, is now down to 25th in the world and is winless since that success at Muirfield.

In a statement to Golf.com he said: “I’ve learned a great deal from him in our eight years together. It’s just that at the moment I need to hear new ideas from a different perspective.

“Butch is one of the great teachers in the history of the game and I believe he deserves to be in the World Golf Hall of Fame.”

The pair got together in the spring of 2007 and seven weeks later won at Sawgrass, a tournament where Mickelson had always struggled.

Three years later the American added a third Green Jacket, at the expense of Lee Westwood, and two years ago finally got to grips with the challenges of links golf.

Mickelson, five behind Westwood at the start of the day, played maybe the round of his life, posted four birdies in his last six holes, shot 66 and won by three.

The pair have also been there for each other as their respective wives have battled health issues. Harmon, now 72, still has the likes of Rickie Fowler, Dustin Johnson and Jimmy Walker to keep him busy, and the split appears to have come on good terms.

The coach added: “I’ve thoroughly enjoyed working with Phil and we’ve had great success together.

“Helping him win the Open Championship in 2013 was one of the pinnacles of my career.

“I see nothing wrong with him seeking advice from another source. We’re great friends and always will be.”

There have been reports, this time in Golf Digest, that Australian Andrew Getson is in line to take over the reins.

The 41-year-old coaches at Grayhawk in Scottsdale where Mickelson played his college golf. Getson coaches Kevin Streelman and none other than Bill Clinton.