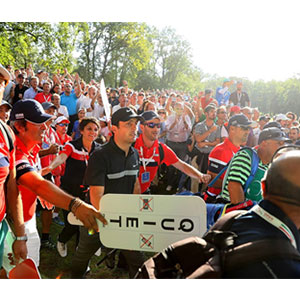 A first win for Molinari since 2012 and he did it in some style in front of a particularly partisan crowd. He was pushed all the way by Masters champion Danny Willett, on the 13th tee he was four clear but he had to hole a five-footer at the last to claim his second national title.

Molinari started with an eagle, thanks to a curling 20-footer, followed it with a birdie and reached the turn in 31. He came home in a one-under 34 butWillett birdied 13, eagled the next and they came to the last with Molinari one ahead.

The Italian hit a brilliant chasing recovery to the front of the green, Willett knocked in a 15-footer which left Molinari facing a nervy one – which he made for a six-under 65.

Chris Paisley finished tied for third at 18 under with Nacho Elvira of Spain and the Englishman has now done enough to retain his card.

What Molinari said: “It’s been a rollercoaster. It’s amazing to see this amount of people out here supporting me. I had the ideal start, I couldn’t start any better. When I birdied 12 I got four shots [clear] and thought maybe I could relax a bit and I got punished straight away.

“Coming in I had nothing left, I was just playing with my soul. I was hitting horrible shots, but somehow I managed to bring it in.”

What Willett said: “I’m sure it’s going to be 100 times worse when we get to the Ryder Cup in America, but it’s been a little bit of a taster. It’s been good to play under that pressure and be under the gun and be in contention. If you finish a golf tournament 21 under par and you lose, I don’t think you can be too disheartened about it.”