Monty’s the man at MCB Tour Championship in Mauritius 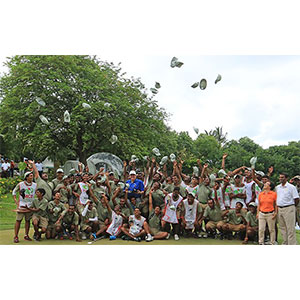 Colin Montgomerie birdied the final three holes to claim his third win of 2015 and smash his own record for winnings in a Senior Tour season.

The €679,147 he earned was over three times more than Englishman Barry Lane, his nearest Order of Merit rival.

David Frost pushed him all the way with five birdies in his first 12 holes but Montgomerie, who bogeyed the 6th and 7th, kept his nerve for his first win in Mauritius.

The win was also memorable for the Scot as he holed in one at the 17th on Saturday.

“This win is right up there,” Monty said.

"The 64 on Saturday really set me up, but David Frost really pushed me all the way. I had to be at my best because it was very tough, but to birdie the last three holes to win gives me an awful lot of satisfaction.

“When I saw I was one shot behind, I knew I had to knuckle down because David wasn’t going to give it to me. But I managed to hit pretty much every fairway coming in, which is what I knew I had to do.

“The 17th has been extremely good to me this week, and in the end the way I played that hole has won me the tournament. I birdied it the first day, had the hole in one and then birdied it again, so I’ve had two putts in three holes and played it in four under.”