It might not have been the 13-shot triumph of three years ago here at Porthcawl but Bernhard Langer, as so widely predicted, emerged as the winner of the Senior Open Championship. It was the German’s third win in the championship – only Gary Player and Tom Watson have done likewise –and it takes the German to 10 senior majors, one more than Player.

Langer, who won the year’s first two senior majors in May, was pushed by Corey Pavin but his one-over 72 to Pavin’s 71 got the job done by three shots. He also matched Jack Nicklaus’ record of three majors in one season with the win.

The start of Langer’s week couldn’t have gone much worse; he was struggling with laryngitis, then had to deal with endless questions over his putting technique and then hit his first competitive shot into a bush but finished the week at four under. Only Pavin was also in red figures after some horrific weather on Friday..

Langer told europeantour.com: “There might have been a little extra pressure, just knowing that I won here by 13 a few years ago. I hit my first tee shot straight into a gorse bush on the left and it was unplayable so, looking back now, it ended a lot better than it started. But, despite my first tee shot and my sickness, I actually had a very good first round and had the lead of the championship, and I think that was the key. I led from the very beginning.. 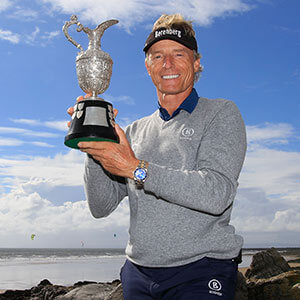 “I led on Thursday, I was co-leader Friday and then jumped into the lead with a 65 on Saturday and never surrendered.”

So Langer, who turns 60 on August 27, has his place booked in next year’s Open at Carnoustie and he will defend this title at St Andrews, the first time the championship has visited the Old Course.

“To have won three majors in one season is pretty spectacular, and it actually could have been four if I didn’t mess up two weeks ago (in the Senior Players Championship).”

Langer double-bogeyed the 17th on Sunday to lose the lead to Scott McCarron.

He is now 12 behind Hale Irwin on the career victories list on the PGA Tour Champions list.