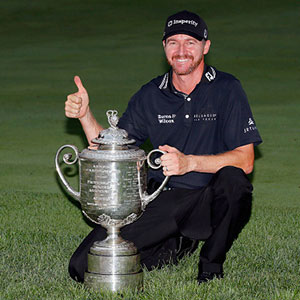 Jimmy Walker produced a nerveless final round to win his maiden Major at the PGA Championship.

The Texan recorded a bogey free 67 to finish on 14-under-par as he completed a wire-to-wire win at a rain soaked Baltusrol.

It was enough for a one shot victory over world number 1 Jason Day, the defending champion coming agonisingly close to keeping the Wanamaker Trophy for another 12 months after making an eagle at the last.

But Walker was so cool, the 37-year-old finding two moments of magic around the turn to take charge having earlier holed a series of crucial short putts for par.

He chipped in from a greenside bunker at the 10th and then sank a curling 20-footer at the very next hole.

A birdie on the penultimate hole, knowing that Day had hit it close for an eagle effort on the last, was the sign of a man in control of his emotions.

He only really suffered three moments of concern – the first coming at the 3rd when, after taking a succession of drops after leaking his drive right into a concession stand, he fired in a brilliant iron to the front of the green and two-putted for par.

Walker then got fortunate on the 15th when another drive clattered a tree but sat down with just enough space to take a swing.

He used his luck when choking down on a short iron to find the heart of the putting surface.

And after Day showed huge courage to eagle the 18th, and Walker was short-sided after finding the rough, he safely found the middle of the green and two-putted to clinch the title.

Walker said: “There was a lot of emotion going on out there, I am not going to lie. It’s tough. I felt a ton of support from the crowd and the fans and it was amazing, it really was. It was a battle all day.”

On a long day of action, when all the leaders played 36 holes, Walker held a one shot lead going into the start of the final act.

He reeled off nine straight pars as, in front, Day endured a calamitous start.

He hadn’t posted a bogey since the 7th hole in the second round but he dropped a shot on the very first hole.

He then fell further behind after some more ragged play on the 3rd.

He repaired the damage with birdies at the 5th and the 9th.

Henrik Stenson, meanwhile, who couldn’t miss at Royal Troon as a closing 63 brought him the Open, found the putts simply wouldn’t drop at Baltusrol.

He did walk in a birdie on the 6th to get a shot adrift but that was as close as he came – a double bogey on the 15th ending his chances.

After such a solid stroll to the turn, Walker’s first big moment came at the 10th.

Hitting a long iron approach into the bunker, he splashed out and watched as the ball rolled into the hole for a brilliant birdie 3.

Day kept the pressure on when sinking a long putt at the 11th for his own 3, only for Walker to reply in kind a few minutes later.

It re-established a two shot lead and, when Day failed to convert a makeable birdie chance at the par 5 17th, his race looked run.

But he fired in a wonderful iron at the final hole to set up an eagle opportunity.

Walker made a crucial birdie on the 71st hole, the putt just dropping in amid the cheers for Day’s heroics.

And even though the Australian did brilliantly to make the eagle, his rival’s iron nerve shone through.

He coolly two-putted to finish the biggest round of his life.

Walker added: “I was thinking up 17 that if I could birdie, I think that would put it out. We made the birdie but, sometimes, things just don’t come easy.

“Golf is not an easy game and Jason is a true champion. I wouldn’t expect anything less – eagle at the last, that’s unreal.

“That really put it on me to make a par. Sometimes pars are hard but we got there.”

Walker’s win completes a year that has seen all four Majors go to first time victors.