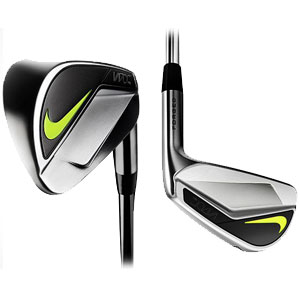 The Nike Vapor Pro Blade irons and Pro Combo irons are already getting a lot of admiring glances, and not just from would-be purchasers. The brand’s staff players, including Tiger Woods and World No.1 Rory McIlroy, may be considering transitioning into them in the coming months, as was evidenced by Rory using a Vapor Driver at the recent Ryder Cup. And the general consensus is simple: if Rory can let go of his VR_S Covert 2.0 driver, which has helped earn him a ton of silver wear this season, in favour of the flashy volt-coloured Vapor range, surely greener pastures lie in having a bag full of the new equipment?

The overriding feeling right now is that Nike has done something which many perhaps thought no longer possible: introduce new impetus in golf gear and make golfer’s fall in love all over again with their irons.

But of course very few of us possess the skills and wizardry of the Woods’ and McIlroys’ of this world, so does that mean these irons aren’t for us? Not according to Nike, which has created the excellent Vapor Speed iron set – ideal for recreational players more interested in distance and forgiveness than Tour-level control.

"Realistically, these clubs have very much been designed like metalwoods," Nate Radcliffe, Nike Golf's director of engineering, in reference to the 3- through 7-irons recently explained.

Each is a hollow-bodied club made of 431 stainless steel, and each has been designed with a centre of gravity (CG) position that is low and back, away from the hitting surface. Players who have a slower swing speed and frequently mis-hit shots will hit the ball higher and farther that little bit easier with one of these irons in hand.

The CG is positioned so low and deep that it has allowed Nike to make each Vapor Speed iron ½-inch longer than standard and strengthen the lofts by 3 degrees compared to the game-enhancing Vapor Pro irons. As an added benefit, the Speed irons maintain the high launch angles that most mid to high handicap golfers want to play with. 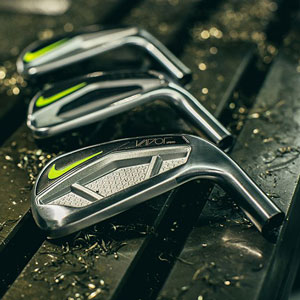 "The face itself has been prepped like a metalwood," Radcliffe added. "It's been laser-welded, forged and then machined to 2.7 millimeters (in the center) and 2.2 millimeters around the outside. It's made from Sub 10, a very strong steel alloy."

A look behind the face of the back of the club reveals two supporting bars called Fly Beams, which are said to increase players stability.

Beginning with the 8-iron, the set transitions into pocket-cavity irons for greater precision and feel on every approach shot.

"We believe that the 8-iron is a pretty natural breaking point," Radcliffe said. "Most players get a little less distance focused and start to get a little more control focused."

Like the Nike Vapor Pro Combo long irons, the cavity behind the face has been filled with the same resin, and the material is lighter and softer than the steel found in the rest of the club. This works to increase its moment of inertia across the face and softens impact for enhanced feel and performance.

The cherry on the proverbial cake comes in the form of a viscoelastic medallion positioned on the back of the club to further enhance a feel that one would think couldn’t be improved upon any further already.

The Nike Vapor Pro Blade irons, Pro Blade irons and Speed Blade irons will be instrumental for golfers upon release, and they will be available both in store and online at american golf, so keep checking back for updates on their release.

At american golf, we stock a huge range of Nike Golf products for men, women and junior players at competitive prices. From clubs and clothing, through to bags and accessories, fans of Nike Golf will find everything they're looking for when they shop at american golf.