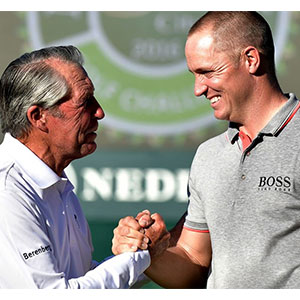 The Swede has now incredibly moved inside the world’s top 10 after a fourth win in his last 11 starts. Noren is now up to third on the Race to Dubai having captured the Scottish Open, European Masters and British Masters. And he did it this time with the lowest round (to par) of the season, a brilliant 63 to overturn a six-shot deficit of Korea’s Wang Jeunghun.

Noren did all the damage in the first 11 holes, getting to nine under for the day after starting the front nine with three birdies and the back nine with an eagle and a chip-in birdie.

Wang was two behind after a birdie at the 14th to Noren’s only dropped shot but then dropped shots at the next two holes.

Wang, the winner back to back in Morocco and Mauritius earlier this season, held on to second ahead of Andy Sullivan, Branden Grace, Ricardo Gouveia, Alejandro Canizares and Victor Dubuisson.

Open champion Henrik Stenson was eighth while Danny Willett finished off a much improved weekend with a 69 to add to his 67.

What Noren said: “I don’t think I’ve ever played as good, especially on the greens. I’ve got a lot more confidence, having the lead and being up there, and the more you do that the more comfortable you become. Obviously it’s been the season of my life. I tried to get in this tournament for so many years, and when I got in here, to end up winning, it feels unbelievable.

“I was quite nervous coming into this round, playing with Stenson and playing with Grace, in front of a lot of people. And then after starting off the way I did I told myself, “You’ve got to believe you can win this,” and I kept hitting fairways and greens and making the putts and all of a sudden I had a great chance which I managed to take.”