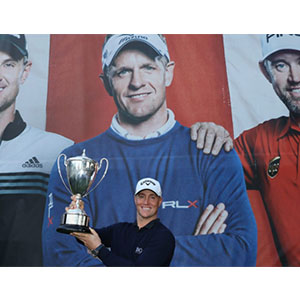 Alex Noren was 471st in the world rankings in January 2015, now after his third win in just eight starts he is up to 18th. He is also guaranteed a place at next year’s Masters.

The Swede carded a 69, with birdies at the first two holes and a fourth one at the last after a stunning pitch shot, to finish two clear of Bernd Wiesberger.

Next year’s tournament host Lee Westwood was third after a third 67 in four days, his best finish since his second place behind Danny Willett at Augusta, with a cluster of players, including Graeme McDowell and Tommy Fleetwood, in a share of fourth.

Wiesberger briefly joined Noren at the top of the leaderboard but the Swede also birdied 15 and the Austrian was unable to pick up any more shots.

Noren’s previous victories this term came at the Scottish Open and European Masters. And it is some turnaround, in 2014 he only played two events in 2014 due to career-threatening wrist injuries.

What Noren said: “It’s very unreal. I never thought about this going into this season. I just worked quite hard and sometimes you get lucky like this. You have to hit the right shots at the right times and I’m very happy.

“I believe in myself, but the big thing is you don’t have to play a perfect game. Just a few parts of your game need to be strong to get a win and I try to stay humble. I know golf is a tough game.”