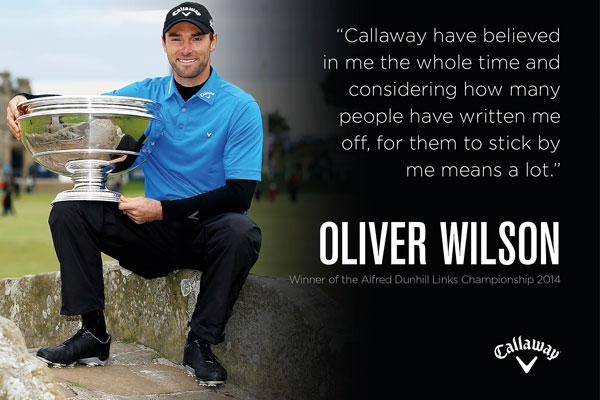 He’s ranked 792nd in the world but you would be forgiven for thinking Oliver Wilson was one of golf's the big-hitters following a first European title victory at the Alfred Dunhill Links Championship where he looked like anything but an underdog.

Englishman Wilson was making his 228th start and finished the final round ahead of a chasing pack which included world No.1 Rory McIlroy, eventually winning by one stroke on 17 under par.

"So many people had written me off and that hurt, but I kept believing," 34-year-old Wilson is quoted as saying on BBC Sport.

"A lot of people had a part in this and I can't thank them enough. This is pretty special.

"I could be drunk for a while - it's been a long time coming and I have a lot of champagne on hold. It's going to be a good party." As well as his title, Wilson also pocketed a tidy amount of winnings, amounting closely to almost £500,000.

Compatriot and playing partner Tommy Fleetwood had a chance to send the tournament into play-off but came up short after missing a 10ft putt for birdie on 18. That left an emotional Wilson to take centre stage and enjoy his victory after a two-year European Tour exemption.

But even McIlroy, playing through a season of exceptional golf, couldn’t snag Wilson’s collar as he brushed all who opposed him aside. He was ranked 104th on the second-tier Challenge Tour before his win with earnings this season of around £10,000. He dropped only one shot in his final round of 70.

"I don't have the words for it," he added. "It's been 10-11 years coming, and nine runner-up finishes where nothing really went my way. To have the invite to play here, I can't thank people enough.

"When I came here at the start of the week I was just trying to make the cut and each day my confidence grew.

"I didn't play as well today but I finished second a few years ago and knew what to do and I was pleased how I stood up to hit some really good shots.

"I've been playing pretty well but I went to see Rob Rock two weeks and spent a lot of time working with him on my swing, and he gave me confidence to go and play."

Wilson did encounter a couple of road humps as he romped to victory, coming into the final round with a three-shot lead before losing it over the front nine. The Callaway player remained cool and collected, eventually setting himself back on track with his rivals simply unable to gain a footing over the man many hadn’t rated with much of a chance heading in.

For McIlroy, however, it was a different story. He had been heavily tipped for a first Dunhill Links success but found himself in trouble early on after getting off to the worst possible start, double bogeying the opening hole after seeing his ball spin back into the Swilcan Burn, although he came back strong by sinking four straight birdies.

McIlroy was seeking a fifth win of the season and at one point found himself tied for the lead down the back nine, but a bogey on the difficult 17th when he rolled his putt off the green into the Road Hole bunker put paid to his fight back.

Playing the pro-am event alongside his father Gerry, who was celebrating his 55th birthday, McIlroy birdied the 18th to get within one but by then he was always going to come up short.

"I probably lost it on those two holes, the first and the 17th but it was fantastic to play with my dad and for him to play St Andrews on his birthday was very special," the Nike golfer said.