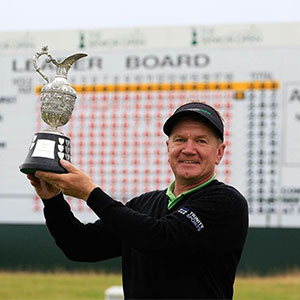 Paul Broadhurst produced a career-defining performance at Carnoustie by capturing the Senior Open Championship on his debut in the event.

With an immaculate sense of symmetry, the 50 year old produced a bogey-free 68 over the notoriously tough Carnoustie links to bookend the 30 editions of the Senior Open with champions from England.

It was Neil Coles who lifted the veterans’ version of the Claret Jug in the inaugural edition back in 1987, and it was Broadhurst who became only the second English winner of the championship with his heroics at Carnoustie on the 30th anniversary of the event.

Broadhurst signed for an 11 under par total of 277 and a two stroke winning margin over American Scott McCarron, with third round leader Miguel Angel Jiménez sharing third place with Swede Magnus P Atlevi a further shot back.

Not surprisingly, Broadhurst acknowledged his love of golf in Scotland. On his debut as a 50-year-old last August, he claimed the Prostate Cancer UK Scottish Senior Open title – an event he plans to defend at Archerfield Links next month.

Now, at the scene of his highest Open Championship finish back in 2007, ‘Braveheart’ Broadhurst was back on top of the pile, but more importantly with a cheque for £213,040 in his back pocket and a lofty position as No.1 on the European Senior Tour Order of Merit.

Broadhurst, who won six times on the European Tour and enjoyed a 100 per cent record from two starts in the 1991 Ryder Cup, had no doubts that victory at Carnoustie was the cherry on the icing on top of the cake.

“This is bigger than all of those wins, I think,” he reflected. “A lot, lot bigger. It’s absolutely massive. I played some of my best golf this week. I hit the ball really nicely and my iron play was really good. The hard work I’ve put in paid off.

“It’s difficult to compare this with the Ryder Cup but, personally, this is the biggest achievement of my career. Yes, the Ryder Cup was massive but that was the result of a load of performances. It was an accumulation of points that got me there. I think this has got to rank higher than the Ryder Cup.”