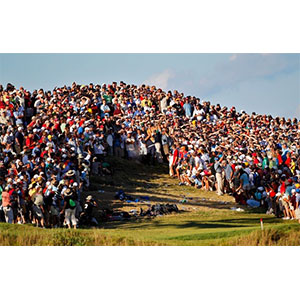 Mark Townsend from National Club Golfer looks back to 2010 – one of the most dramatic weeks in PGA Championship history.

It is not often that the player who tied for fifth is remembered more than the eventual champion.

Earlier in the year Dustin Johnson blew a three-shot lead at the US Open with an error- strewn 82.

He came to the 72nd hole here with a one-shot lead and then flailed a drive into a patch of sand where the gallery had been walking all week.

The shot should have been treated like a bunker shot – but it wasn’t. Johnson grounded his club and incurred a fatal two-shot penalty.

“The only worse thing that could have happened was if I had made the putt on that last hole,” he said.

Seven players held a share of the Sunday lead and it was left to Martin Kaymer and Bubba Watson to put the finishing touches to a cracking week.

Sunday 19.50 (BST) - Nick Watney begins the day with a three-shot lead. By the time he has doubled the 1st he is level with Dustin Johnson.

20.04 - The first big move as Bubba Watson makes an eagle at the 5th, he’s now one of eight players within two of the lead.

21.20 - Watney’s race is run as he finds the water at the 6th en route to a treble. The overnight leader finishes T18 after a closing 81.

00.01 - DJ smashes his drive into the crowd and then hoists an iron long and right from a sandy lie. Has a seven-footer to win.

00.07 - Johnson misses and is told by an official on the 18th green that he might have grounded his club with his second shot. 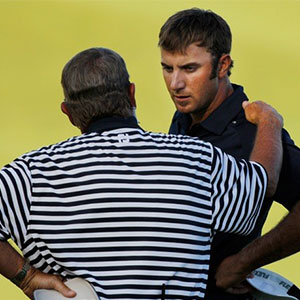 00.36 - Tournament director explains the ruling was posted on the mirrors in the locker room and that Johnson had no excuse.

00.40 - Bubba strikes at the first of three play-off holes. A long drive sets up a straight-forward chip and a putt. Kaymer pars.

01.12 - Bubba hits the flag from the sand, takes six and Kaymer taps in for a five and his first Major. Strange old week…