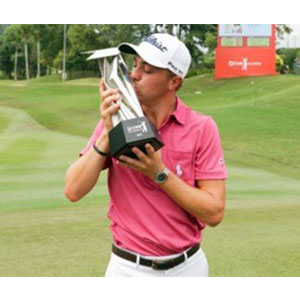 The American began the day four shots behind Anirban Lahiri and ended it a three-shot winner to defend his title in Malaysia.

Thomas shot a 64, five birdies on the front nine and three on the back, to get the better of Hideki Matsuyama (66) with Lahiri tied for third with Derek Fathauer.

Thomas’ week was almost faultless – he opened 64-66 but then dropped four shots in three holes and, despite finishing with five straight birdies, he had lost what looked like valuable ground to the Indian.

Lahiri had a very strange final day, running up a nine at the 3rd after his drive got stuck in a tree, followed that with a birdie and eagle and signed for a 72.

What Thomas said: “I feel like I just need to continue to build on this momentum and try to use this as kind of a springboard to the start of the year. To try to move up in the world rankings and get in that top 10, get in that top five.”