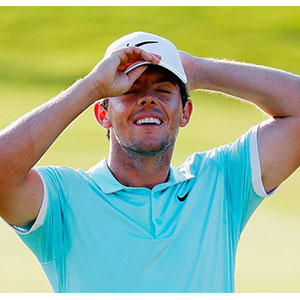 The 16th hole at East Lake proved to be a very lucrative hole for Rory McIlroy as he birdied it to finally get the better of Ryan Moore at the fourth time of asking.

Earlier in the day he knocked in his second shot to move within touching distance of the leaders Kevin Chappell and Ryan Moore and then he made a three to record a second win in three starts and pocket the ludicrous $10m bonus.

The scenario in the play-off was if McIlroy won he trousered the lot, if Chappell or Moore did then Dustin Johnson would collect the $10m bonus. At the first extra hole McIlroy hit an enormous drive, around the 350-yard mark, and an iron to six feet but, having watched Moore hole a 15-footer, he then saw his putt horseshoe out. Chappell could only par and so exited stage left.

At the next McIlroy was again in control (at the 18th) after a bold recovery shot but the putt stayed out, Moore holing a four-footer for his par. And then it was on to the 201-yard 15th, over water and with the light fading. Moore came up short in the rough, McIlroy long but on the green – the American chipped up dead, the Northern Irishman holing from six feet to keep it all going.

On to 16 and the scene of McIlroy’s earlier hole out. Moore knocked in a 20-footer for par and, finally, McIlroy followed him in but for a birdie three and all the riches.

McIlroy made just one mistake in ‘normal time’ with a bogey at the 2nd and he turned it on over the back nine, as he had done all week, coming home in 30. The highlight was undoubtedly the wedge at the 16th to vault him right into contention and an up-and-down from sand at the last got him to 12 under.

Over the four days he played holes 1-10 in -15 and the front side in three over. If anyone will have enjoyed the switch in nines at East Lake it will be McIlroy.

Moore had a chance to win it with back-to-back birdies at the last two holes but his putt at 18 somehow lipped out.

Chappell looked the likely winner in the closing stages with birdies at 10, 13 and 16 but he then dropped a shot at 17 and never threatened at the par-5 last.

The anticipated Johnson procession as he stuttered to a three-over effort. All seemed fine and then it began to unravel with a wonky approach to the 5thand a double bogey at the 12th saw the end of his chances.

What McIlroy said: “I’ve made it no secret that it’s one of the last things I feel like I had left on my golfing CV, and I made it a big goal of mine especially after the summer had gone, to win it. So to be here and to win the FedExCup, especially where I came in in the mid-30s somewhere, to play the way I have in the last few weeks to get it done is very special.

“I said to myself on the 15th tee, if I can finish with threes, I’ll give myself a chance. I didn’t quite think the eagle was going to come as soon as it did (a two at the 16th). But when something like that happens, you have to make the most of it. The holed shots from the fairway, it’s part skill, but there’s an epic part of luck in there as well, and I took advantage of it and made birdie at the last.”