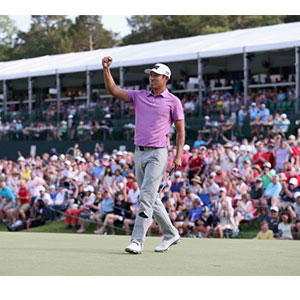 James Hahn hadn't played a weekend on the PGA Tour since the Super Bowl in February but managed to overcome eight missed cuts, and a playoff, to pick up his second win at Quail Hollow.

He hadn't broken 70 in 18 consecutive rounds but a 70 was all he needed to get into a playoff with Roberto Castro, winning at the first hole of sudden death.

What Hahn said: "The mind is a powerful thing and it was going bad for a while. (I) just didn't have the confidence, didn't believe in myself. I felt like I was putting in the work but wasn't getting any reward for it, so it made me not want to put in as much work because it's not gratifying."

He added: "It was a relief to make the cut. But to be 100 per cent honest with you guys, we dream bigger than that. Making cuts on this tour is not something that I get happy about. Competing and having a chance to win on the back nine on Sunday is something that gets me up in the morning."