The 142nd Open Championship at Muirfield saw Phil Mickelson come from five strokes back to fire his way into the history books with a first Open victory and fifth major triumph. 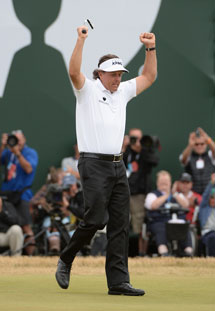 The American won by three shots to card a 66 finish ahead of Sweden’s Henrik Stenson, who carded 70 for his best finish in a major. English duo Lee Westwood and Ian Poulter finished four behind alongside Masters champion Adam Scott.

Phil Mickelson had barely finished celebrating his win at the Scottish Open than he was once more engulfed by the media in the wake of his latest triumph. He buried four of the last six holes at Muirfield before breaking down in tears on the final green as he hugged his caddie Jim ‘Bones’ Mackay.

Mickelson now becomes the third consecutive player in his forties to win The Open, following on from Ernie Els and Darren Clarke.

Elsewhere, Lee Westwood cut a forlorn figure on the greens as he saw his hopes of a first major success in 62 attempts gradually begin to fade under the overcast and windy Mid Lothian golf course. He had led by two going into the final day and moved comfortably into a three-shot lead after coming through five holes, before his game went south. A shot into the pot bunker on the short seventh took him two attempts to get out of, and from then on he struggled to maintain the momentum to push on, eventually ending with a 75.

Tiger Woods, a favourite pick by many, began two behind Westwood and was looking positive to claim a 15th major title, but in the end he had to settle for a 74 finish for two over.

Ryder Cup hero Ian Poulter came from eight strokes back with an excellent 67. Australian Adam Scott, who was using the soon to be banned anchored putter, led proceedings for a while before falling off and finishing with a 72.


To view our full range of Callaway golf clubs, putters, balls and much more, click here