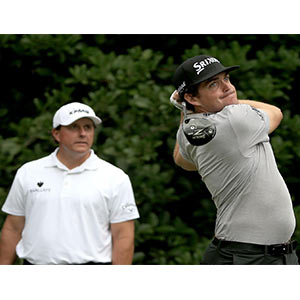 Phil Mickelson tells a good story and this is a cracker. Speaking on the Golf.com podcast the left-hander relates a tale of how he and Rickie Fowler once took on Brendan Steele and Keegan Bradley in a Tuesday money match at The Players.

What you need to know is that Bradley has been paying out for around a year and a half, he’s never won a penny and he’s all set to drop out of these pre-tournament get-togethers.

So this Tuesday at Sawgrass is going to be Bradley’s last if he has to pay out again.

Over to Mickelson: “Fast forward to the 12th green. Keegan and I have about a 16-footer and 14-footer, and I’m away. Now they’re 2 up. They’re 2 up. And as I’m standing over this putt, I back away, and I say, ‘Oh my goodness, this putt is the entire match.’

“And Keegan bit, and he goes, ‘Oh yeah, how so?’ which is what I was hoping he would say.

“And I just chuckle about the story every time I hear it, because it’s just funny. And I don’t care about the money. I just love being able to – and I give him smack about this every time I see him.”

Bradley did take a year out but has since been back and has now won some matches.