Poulter looks set to miss out on 2016 Ryder Cup 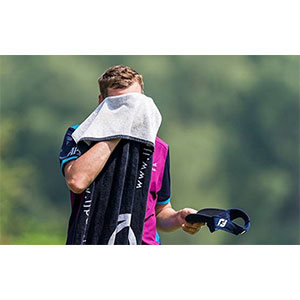 OK, pay attention. Ian Poulter plays on both Tours so struggles to play in 13 European Tour events. To play on Darren Clarke’s Ryder Cup team next year you have to meet this requirement otherwise you lose your membership.

At the start of last week Poulter had only played in nine and a trip to next month’s WGC-HSBC Champions would have been one of his four to fulfil his quota.

But you need to be in the world’s top 50 to make it into the elite field in China and Poulter slipped from 42nd to 51st in the space of just two weeks after Andy Sullivan and Emiliano Grillo won last week. It was the first time he had fallen out of the prized top 50 since September 2006.

So Poulter had to hot-foot it to the Hong Kong Open at the expense of Rich Beem who had already travelled from Texas to Hong Kong but then had to hand back his invite. To add to the problem both his passports were with the visa people and they were returned at 7.15am, just in time for his 9am flight on Tuesday. “If they had arrived at midday I was done because I couldn’t have physically made the flight in time and I would have missed the start of the tournament,” Poulter explained. “I feel very sorry for Rich to have been put in this situation. He has been very gracious and it is a lovely gesture. I didn’t want that, the Tour didn’t want that and I don’t think anyone would want to ask a guy who had flown halfway round the world to play a tournament to give his spot up.” Poulter, without his usual caddy Terry Mundy, was third after two rounds but then dropped away to a tie for 29th.