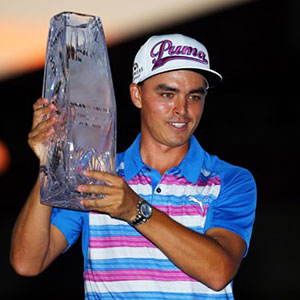 Rickie Fowler landed his second PGA Tour win at the Players Championship just days after being labelled “overrated” in a survey of his fellow professionals.

Fowler emerged victorious over Sergio Garcia and Kevin Kisner after a three hole playoff was needed to separate the three men at TPC Sawgrass.

Fowler, Garcia and Kisner were inseparable after the 72 regulation holes, with all three players recording 12-under rounds for the tournament.

But Fowler had been trailing by five strokes with just six holes to play before he birdied 13, 15, 17 and 18 and eagled 16 to take the momentum into the play-off.

The players returned to holes 16, 17 and 18 in an bid to crown a winner. Garcia was unable to keep pace with the American duo.

The 35-year old Spaniard, and former Players Championship winner parred all three extra holes to fall just short and out of contention.

"It's amazing," said Fowler. "We obviously look at this tournament as one of the biggest that we play up against the Majors."

"This is a special week, everyone looks forward to it.

"And I'm just happy I had a chance after my finish this afternoon, to get in the playoff and to be here on 17 to get it done."

After getting pushed all the way by Garcia and Kisner - still without a win on the PGA Tour - Fowler said: "Well I was obviously against two great players, I know Kis hasn't been out here long but he's a solid golfer.

"Sergio - you don't have to talk much about him - he can play.

"I knew it wasn't going to be easy, but I made some good swings. Probably some of my best [here] on 17.

"I felt like my game was where I want it to be, but unfortunately I didn't play well here on Saturday.

"We finished it off strong and I think we're back where we should be."