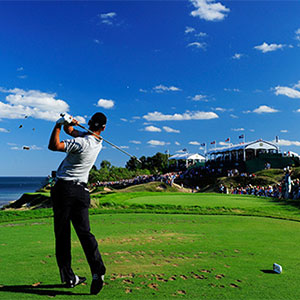 The final major of the year is at the incredible Whistling Straits alongside Lake Michigan. A Pete Dye masterpiece which visually surely has very little to beat it. Long, challenging, open to the elements and - oh yes - nearly 1000 bunkers.

The hard thing to imagine is that the area was dead flat, an old airbase, before the scooping and mounding and dumping of an entire beach to create the faux dunes and mounds. An incredible engineering feat, one which matched Dye's imagination.

Now the World's best players get to pit their wits against the links once again and finding the photo-fit for this week is not easy as last time Martin Kaymer won, Bubba and Dustin just missed and Zach finished 1 shot outside the playoff.

The fact that they are medium, long, super long, super long and average in terms of power might just give everybody a crack this week. Therefore picking my 5 to follow is tricky.

The big news is that Rory is back and raring to go and hopefully he is fully fit as he is at the quick end of possible recovery time from his ankle injury and a rush back would not be ideal. Further damage is not an option. Sitting out the last few weeks for the world number 1 must have been hellish, watching Jordan Spieth get to within striking distance of his world rankings perch and he must be dead keen to get back at it but his lack of tournament play through the summer will count against him this week and rust will be an issue so I'm not picking Rory.

My first consideration has to be the player of the year, Jordan Spieth. 2 major wins and missing the playoff by a shot in the third has him in the form of his young life. Even last week he posted 66 in the final round to chalk up another top 10 and with his keen interest in the history of the game, it will not be lost on him that 3 major wins in a calendar year would put him in a very elite group.

His draw with Rory and Zach is a beauty and will drag a huge crowd around with it. Zach Johnson is full of confidence after his brilliant win at St. Andrews and although he's said that Whistling Straits is not his favourite, he will be aware that back in 2010 he as I've mentioned before almost made the play off so you've got big time form with Johnson and previous on the layout which must give him a shout.

The other Johnson, Dustin, has been an enigma this summer. Halfway through the Open, he was leading on a golf course that he was reducing to a pitch and putt and seemed set to break his major duck then he produced a couple of howlers in the final 36 and left with his tail between his legs. Maybe it was fallout from what happened at the U.S. Open on that final green but Dustin shakes off the dust and comes back again. He did at the WGC Bridgestone last week and was contending again then he was struck down once more by weekenditis. So he is back at a venue that he should have won on last time out with the knowledge that there is some really good golf in there.

Four good rounds are on their way sooner or later for big D and I think it might be sooner.

Ricky Fowler has had a big year, a win at The Players then at the Scottish Open, 2nd at the Quicken Loans and top 10 last week at Firestone.That is really good form and Ricky has shown us that he loves the big events and I expect him to be a part of the run in on Sunday afternoon.

My fifth to watch is the joker himself Henrik Stenson. 5 top 10's this year including 2 runner up spots will not pacify the world no 9 and there are signs that a big performance is on the doorstep.

I will be amazed if when the big swede hangs his boots up his trophy cabinet does not include at least 1 major and maybe this is the week. A European won it last time it was here so maybe it'll happen again.

Have a great week.