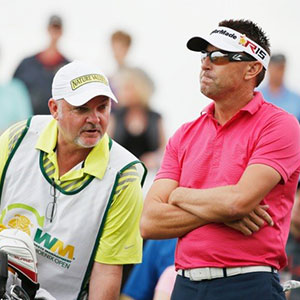 Robert Allenby’s sorry 2015 season continued to take a downward turn after he sacked his caddie after nine holes of the first round of the Canadian Open.

Allenby hit an 8-iron to the par-5 13th on the advice of his bag man Mick Middlemo, he had wanted to hit one more, and the ball found a creek short of the green and he made a treble bogey.

The 44-year-old said he told Middlemo: "You know this happens every week. We keep making bad mistakes and you're not helping me in these circumstances."

Allenby’s season has featured a string of poor finishes and missed cuts.

He added: "He just lost the plot at me. He got right in my face as if he wanted to just beat me up. I said, 'Stop being a such-and-such and calm down and get back into the game.'

"And he just got even closer and closer and I just said, 'That's it, you're sacked. I will never have you caddie again.'"

They continued in silence until the 18th and then Middlemo made another remark and Allenby replied: “You don’t deserve to be caddying out there.’ And he just got right in my face and threatened me, so I said, ‘Go.’ So he left.”

For the remainder of the round a teacher from the gallery offered to pick up the bag.

Allenby shot an 81 and then withdrew.

”I’ve been called a bad caddie but when the personal insults come in and you're being called a fat so-and-so I got a little bit peeved by it. And then the third time he said it I walked up to him and basically said 'I dare you to say that to me again'.

"He didn't say it again. There was never going to be any violence. I was just going to put the bag down, get my gear and leave.”

This was the third time that Allenby has been left caddie-less after various fall-outs.

After the incident Middlemo claimed he didn’t believe Allenby’s story about being beaten up and kidnapped in Hawaii earlier this year.

Middlemo said he had protected the golfer and publicly supported his story because he was asked to.

“Do I think he just fell over and cracked his head?” Middlemo said.

“Honestly I do…I think he fell over and someone picked up his wallet and had a great time with his credit card.”