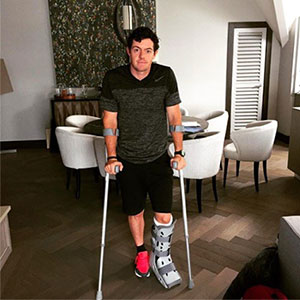 Ligament damage during 'kick about' likely to ruin Open defence.

Rory McIlroy has ruptured his ankle ligaments less than two weeks before he his due to defend his Open Championship crown at St Andrews.

The world number one took to social media to break the news on Monday morning but has not stated how long he will be away from the golf course.

"Total rupture of left ATFL (ankle ligament) and associated joint capsule damage in a soccer kickabout with friends on Saturday," he wrote on Instagram.

"Continuing to assess extent of injury and treatment plan day by day. Rehab already started..... Working hard to get back as soon as I can."

A spokesman for McIlroy has allegedly said he has not ruled himself out of The Open but it would take a miraculous recovery to be fit enough to compete at St Andrews.

The Northern Irishman is also set to defend his PGA Championship title at Whistling Straits in August but could be struggling to make that event as well.

It could pave the way for Jordan Spieth to complete a season Grand Slam after the American landed the first two majors of the year.