Rory back to his best with stunning Dubai double 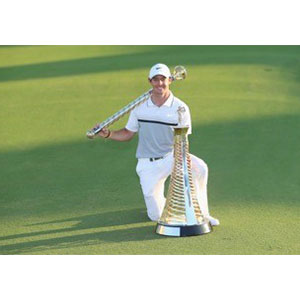 Rory McIlroy insisted he wanted to finish the season on a high and was true to his word with a stunning victory at the DP World Tour Championship which also clinched the Race to Dubai crown.

Overnight leader Andy Sullivan made the number three produce his best golf to finish on -21, just one shot ahead of the Englishman.

And while McIlroy showcased his impressive play off the tee with driver, it was his putting that really made the difference in a tense finish.

With a two shot lead going to the par-3 17th, McIlroy found the water before needing to hole a 35 footer for bogey to give himself a one-shot lead going down the last.

Sullivan thought the door had been left open but McIlroy slammed it shut by holing the putt before sealing victory with par at the last.

“Thankfully I rolled that putt in on 17,” McIlroy said.

“I guess if I had been tied playing the last, I would have backed myself with my length, but giving myself that one-shot cushion made a huge difference.

“I’m happy that this was my last event of the year and I’ve done really well and I’ve ended the season on a high.

“I’m happy to put the clubs away for a while. I’ve played really good golf this week, 13 under par weekend, I couldn’t think of a better way to finish the season.

I feel like my game and my putting has been gradually progressing throughout these last few weeks. It was nice to hole some putts over the weekend.”

The 26-year-old came into the week with a 1,614-point lead over Danny Willett in the Race to Dubai and needed to match whatever his rival did, but sealed his position emphatically in a repeat of 2012 - the year he first won the season-long money list.

Willett put up a valiant fight, taking a share of fourth place with a two under par 70 in the final round.