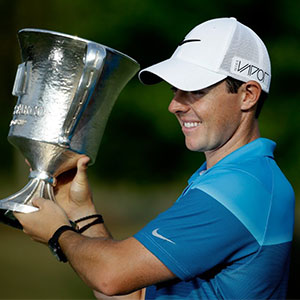 Rory McIlroy cantered to the Wells Fargo Championship at Quail Hollow following up his superb course record breaking third round to finish 21-under.

The chasing pack never looked like getting close to the Northern Irishman as he recorded his 11th PGA Tour win - five years on from his first at the very same venue.

"I think the golf course here sets it up perfectly for me," said McIlroy. "I had a goal today to go out there and birdie the par-5's and birdie the two driveable par-4's.

"I knew if I made six birdies that out there, there was pretty much no way anyone could catch me with my length and the way I feel like I'm driving it, it's a big advantage around here and it worked this week."

McIlroy’s final round three-under 69 gave him the title seven shots ahead of American duo Webb Simpson and Patrick Rodgers.

McIlroy posted scores of 70, 67, 61 and 69 and is aware of the pitfalls that complacency could have on his game.

“Back in 2012 when I got the World Number One I felt like I got a little bit complacent," said McIlroy.

“The great thing is that I have fallen into that trap before, and now that I’m in this position I’ll realise if I ever get into that mindset again.

"I just work as hard as I can and try to be the best that I can be, that’s the only way to fight overconfidence.

"I’m firing on all cylinders and I did what I wanted to do over the last few weeks.

"I’ve got myself up the Fedex Cup rankings and solidified my place at the top of the World Rankings so I’m looking forward to putting the feet up tonight and getting a bit of sleep and then get ready for the next couple of weeks in Europe."

This was the Northern Irishman's second win in three starts on the PGA Tour and follows up a WGC-Match Play win with a tied-eighth place finish at The Players Championship.

And with a win in his last PGA Tour start before the US Open later next month, McIlroy will be in great form coming into the second Major of the season.

"It still feels like a long long way away [The US Open]. But it’s fantastic to play like this leading into it.

"I'm delighted to get the win and I've got a lot of momentum going into the next few weeks."