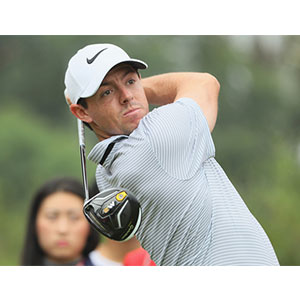 TaylorMade mightt have Jason Day and Dustin Johnson on their books but there can be no bigger endorsement of their equipment than when free agent Rory McIlroy puts them in his bag.

McIlroy can basically now play whatever clubs he wants after Nike revealed this summer that they would be exiting the clubs and balls market. The Northern Irishman has indicated that he has already tucked aside a three-year batch of Nike’s RZN Tour Platinum balls but the move away from the clubs began when he used a Scotty Cameron mallet as he won twice on the PGA Tour.

Now TaylorMade’s M2 driver, a degree lower at 7.5˚ than his Nike driver, and fairway wood have joined the four-time Major winner’s bag and the early signs are fairly promising.

“I’m trying a couple of things. It definitely doesn’t mean that it’s permanent, but it gives me the freedom to go at the end of the year and try some stuff out and be in the position where I can use whatever in my golf bag that fits me 100 per cent the best,” McIlroy said. “So that could be a certain driver and then a different brand of 3-wood and a different branded set of irons and different wedges and a different putter. That’s a process that I’m still working through.”

And McIlroy was in good company in China (where he tied for fourth) with Nike stalwarts Paul Casey and Francesco Molinari also using the M2.