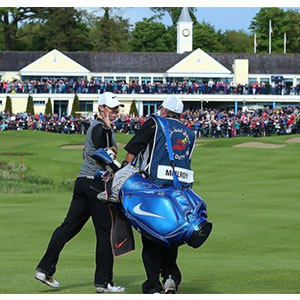 The last three years Rory McIlroy has missed the cut in this tournament, now he has a win that he ranks just below the Majors.

His winner’s cheque of £515,000 will go to his own foundation which hosted the tournament for the second year.

Masters champion Danny Willett looked to be McIlroy’s biggest challenger but he fell away over the closing holes after parring the first 13 holes.

Knox was using a borrowed driver from Sweden’s David Lingmerth after cracking the face of his own club on Thursday and he was one shot ahead after back-to-back birdies at 14 and 15, but a two-shot swing at 16 gave McIlroy back the momentum and he closed it out in style.

Matthew Southgate, who regained his European Tour card via the qualifying school after undergoing treatment for testicular cancer last year, produced a 68 to claim fourth spot, the best result of his career.

What McIlroy said: “I don’t really get emotional when I win but I was trying to hold back the tears on the 18th green, looking up and seeing all my friends and family. I don’t get the chance to play in front of them very often so to play like that and to finish like that, I will never forget it. I’d put winning your national open up there with winning a WGC, just below the Majors.

“I was trying to stay as patient as I could but it’s quite hard when you have 30,000 people roaring you on. The ovation I got when the ball landed on the 16th green sent shivers down my spine.”