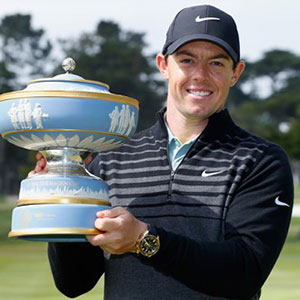 Rory McIlroy claims he carried momentum from crushing Rickie Fowler in the Ryder Cup singles into his commanding victory at the WCG-Cadillac Match Play.

The world number one may have missed out on ringside seats for the big fight in Las Vegas on Saturday night, but he made amends by giving himself an early birthday present at TPC Harding Park, San Francisco.

McIlroy, who turned 26 on Monday, defeated Gary Woodland 4 and 2 in the final, his third win of the day after completing victory over Paul Casey in the quarter-finals and producing a brilliant finish to get the better of Jim Furyk in the last four.

“I'm really proud of myself with how I showed a lot of character early in the tournament coming back from some deficits,” McIlroy said.

“I played really solid golf. I have got on a nice little run in match play. I got a lot of confidence from the way I played against Rickie (Fowler) in the Ryder Cup last year (winning 5 and 4) and just followed it on through into this.

“Obviously I am delighted, a second World Golf Championship and first win in the States this year and so I could not be happier.”

The four-time Major winner made a scrappy start to the final before a hat-trick of birdies from the fifth took him four up at the turn and seemingly certain to win his second World Golf Championships title after victory in the Bridgestone Invitational last year.

However, after both players birdied the 10th, McIlroy bogeyed the 11th having failing to get up and down from a greenside bunker and Woodland reduced his deficit further thanks to driving the green on the short par four 12th and two-putting for birdie.

World Number 52 Woodland looked like winning another hole after McIlroy bogeyed the 13th, only to miss from two feet for par after a superb recovery from a greenside bunker.

And that proved to be the pivotal moment in the contest as Woodland then three-putted the 14th and made a mess of the 16th to give McIlroy the title.

England's Danny Willett, who lost to Woodland in the semi-finals, secured third place after beating Furyk 3 and 2 in the consolation match.

Willett’s third place cheque of $646,000 solidified his position of second place in The Race to Dubai, while McIlroy’s $1,570,000 for establishes a commanding lead at the top of the standings.

“The World Golf Championships are very important to us as players,” McIlroy added.

“They're a group of events where you get the best group of players in the world.

“This ranks just below the Majors, just like I did with my victory at Akron last year.

“These Wedgewood trophies are nice to look at in your trophy cabinet. It will be going in there right next to the one I won at Bridgestone last year.”