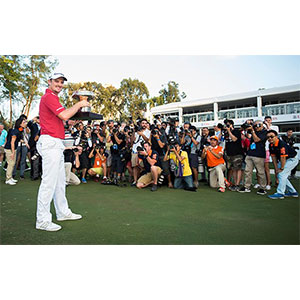 Justin Rose made it eight career European Tour wins with a final round 68 nudging him ahead of Norway’s Lucas Bjerregaard in a two-horse race at the Hong Kong Golf Club.

The Norwegian’s double bogey at 14, when he caught a tree with his second shot, proved crucial and a Rose birdie two holes later meant he could afford to bogey the 72nd hole.

South Korea's Soomin Lee produced the round of the day, 64 to share third with Patrick Reed, Jason Scrivener and in-form Matt Fitzpatrick who is now up to 12th on the money list.

At the other end of the Race to Dubai Matt Ford, who began the week at 117th, kept his card with a tie for seventh but Ben Evans, who was one place behind Ford at the start of the week finished one shot behind him, and agonisingly short at 111th.

What Rose said: "It was the first time I had the chance to play with him. I was thoroughly impressed, not just his game but his temperament and how he is as a person.

“When you separate yourself from the field like we did, it's probably a tough one for him to lose. But he didn't lose it, just both of us played incredibly well.

"Dubai is a tournament I've played well at in the past. I've had a couple second-place finishes there. I'd love to break that duck, as well.”

What Bjerregaard said: “The last time I was out in the final group on a Sunday, I shot 89. So 20 shots better today, I'll take that."