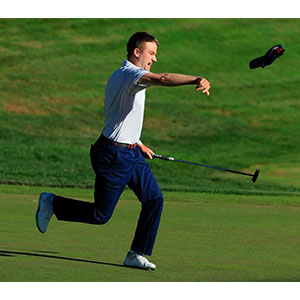 The tournament will always be remembered for Jim Furyk’s closing 58 but this victory could have an added significance when Europe meet America at Hazeltine.

Scotland’s Russell Knox added a second win on Tour when he drained a 15-foot par putt on the 72nd green to hold off Jerry Kelly.

The par gave him a 68 and 14 under total but he was made to sweat down the closing stretch.

His playing partner and overnight leader Daniel Berger followed his Saturday 62 with a 74 after starting the back nine with four straight bogeys and Knox had, until the last, seen his final round littered with a succession of close shaves on the green.

But, after finding sand at 18 and a timid recovery, he knocked his putt straight in to join a stellar list of multiple winners this year; Jason Day, Jordan Spieth, Dustin Johnson and Adam Scott.

Furyk’s 12-under piece of history was enough to get him a share of fifth place.

What Knox said: “Right before I asked him (my caddy) what he thought, how much break, I told him, I got it because I didn’t want to hear what he had to say in case it was slightly different from what I was thinking.

“I just trusted my read, and it was just a nice gentle, right-to-left putt. I played it just a little higher to the right, and about halfway I had a good feeling it was right in the middle.

“Fred Funk is my idol. Of course when he won The Players he had the famous hat throw, and then Tiger has obviously done it at Bay Hill once or twice. I think Aaron Baddeley might have chucked it a few weeks ago when he won too.”

Knox is outside the automatic Ryder Cup qualifications places but will have done his chances of a wildcard pick no harm at all.